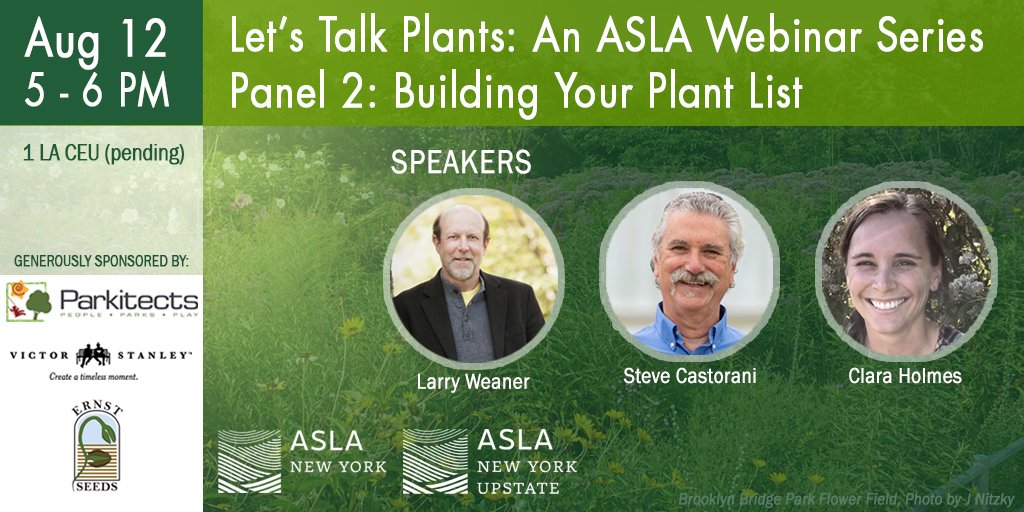 Throughout the summer, the New York Chapters of the ASLA will host a webinar series centered on the topic of native planting.  For each event, a panel of regional and internationally-renowned experts will come together to present their perspectives and engage in conversation enabling attendees to peer behind the curtain and learn new approaches to native planting design.  This four-part series will cover topics such as: the importance of natives, the realities of specifying and sourcing, native plants versus nativars and near-natives, and designing with natives.  We hope you join us for these discussions.

Once you’ve decided to plant with natives, developing a plant list and finding cost effective and readily available sources can be challenging. This second panel of our roundtable series with the New York and New York Upstate Chapters will explore strategies for selecting and sourcing plant material for your project.

Larry Weaner founded Larry Weaner Landscape Associates in 1982 and has gained a national reputation for combining ecological restoration with garden design traditions. In 2008 he received the top three design awards from the Association of Professional Landscape Designers, and his work has been profiled in regional and national publications, including The New York Times. An active guest lecturer and instructor for horticultural and environmental organizations throughout the U.S, he developed New Directions in the American Landscape, a conference series dedicated to advancing the art and science of natural landscape design.

Steve Castorani is President, CFO and co-Founder of North Creek Nurseries of Landenberg, Pennsylvania, a progressive nursery specializing in perennial, fern, vine, and ornamental grass plug production with an emphasis on Eastern regional native plants. In 2004, Steve co-created the American Beauties Native Plant® brand, which distributes plants to independent garden centers throughout regions of the United States. Mr. Castorani also co-owns an independent garden center—Gateway Garden Center located in Hockessin, Delaware with his wife Peg, a business they established in 1986. Steve is past president of the International Plant Propagator’s Society, and became a Society Fellow in 2005. In 2012 Mr. Castorani had the honor of receiving the society’s most prestigious Award of Merit. Steve is very involved in his state’s green industry and served two years as President of the Delaware Nursery and Landscape Association, and has served on the Delaware Invasive Species Council, developing guidelines for the implementation of an invasive species policy for the state. Most recently, Steve became the 2020 recipient of the Paul Ecke Jr. Commercial award given by The American Horticultural Society in recognition of him contributions to commercial horticulture.

Clara Holmes is a Plant Ecologist with NYC Parks. Most of her field work consists of monitoring vegetation pre and post restoration, and tracking rare plant populations in NYC Parks. Prior to working with NYC Parks, she managed the Mid-Atlantic Regional Seed Bank, a regional seed collection program. This program collected native seed for regional restoration projects particularly large scale coastal restoration efforts after hurricane Sandy. She holds a Master’s of Science from Pace University and Bachelor’s of Arts from the College of Charleston.

This is a TWO PART REGISTRATION PROCESS.  1) Register below  2) Prior to the event you will receive a link to the Zoom registration, YOU MUST COMPLETE THE ZOOM REGISTRATION IN ORDER TO RECEIVE THE LINK AND PASSWORD TO THE EVENT.