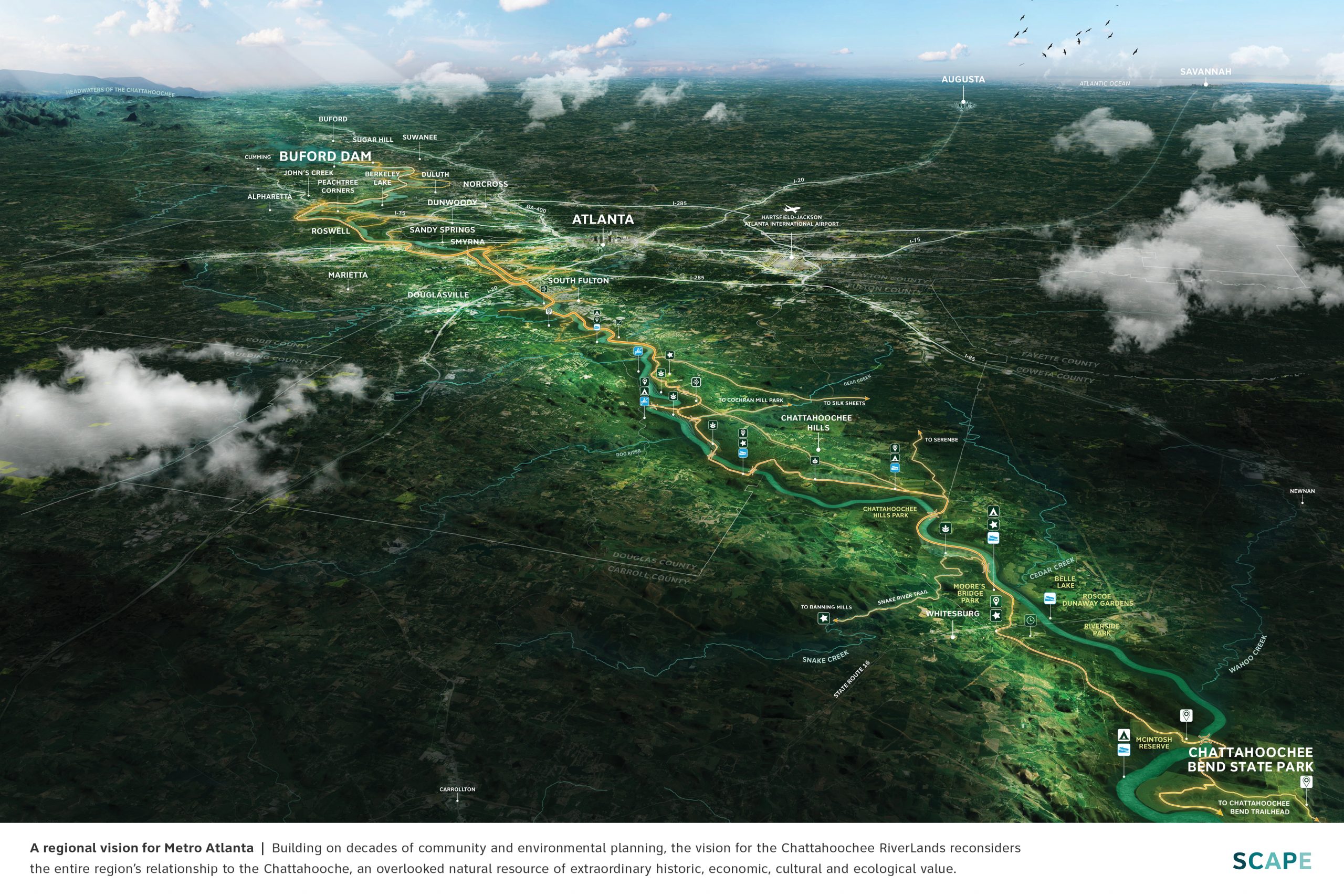 In the backyard of Metro Atlanta, the Chattahoochee River is an overlooked resource of extraordinary economic, cultural, and ecological value. Spanning 100 miles, the Chattahoochee RiverLands is a vision for an equitable public realm that builds on decades of planning efforts and environmental policy to re-center the Chattahoochee as a regional resource for all – especially populations historically excluded from open spaces. The project includes a main trail for pedestrians and cyclists, tributary trails, a water trail for recreational boaters, and series of recreation and restoration destinations that invite people back to the water’s edge. The RiverLands was also an intensive regional engagement initiative, with a designer-led two-year-long public engagement process of nearly 290 stakeholder and community groups over seven counties.

• Altogether, the project will serve a user base of 1 million residents living within 3 miles of the trails, critical in a region that lacks large-scale landscape resources and has an ever-growing urban population.
• Beyond a physical network, the RiverLands vision builds on a decades-long legacy of social and environmental planning and activism. Ultimately, the project’s goal is to create a connective spine along a water body that has historically sustained, divided, and recently inspired communities throughout the region—creating access points both between neighborhoods and along the water’s edge while fostering a sense of stewardship and conservation of the river.
• The RiverLands vision also builds on a legacy of environmental conservation and regulation in Georgia – namely, the Metropolitan River Protection Act (MRPA) of 1973, which emerged from a grassroots initiative by the “River Rats” and protected a 48-mile stretch of the river from urbanization. The RiverLands vision expands this environmental legacy to the entire Metro Atlanta river corridor, bringing access points between communities that have been divided from the river for years with an ecologically-aware approach that identifying further sensitive sites for restoration.
• Working with a diverse client group, the landscape architecture-led team worked over two years to engage nearly 290 groups over seven counties through public forums, design charrettes, “river ramble” outings, and focus groups to solicit aspirations and experiences of the Chattahoochee. To facilitate this process, the team also assembled a “Chattahoochee Working Group” of congressional districts, municipalities, counties, and non-profits to provide regular input on design strategies.
• As a key part of the planning process, the RiverLands team also developed a series of evidence-based Equitable Development Principles led by a team of partnered academics, centering the need for new practices in community engagement to engage low-income groups, hyperlocal neighborhood and tenant groups, community development organizations, individuals with disabilities, immigrants, and non-English speaking communities. The team identified a clear need for continued study into the potential effects of ‘green gentrification’ and displacement as an unwelcome impact of new green space developments, analyzing other local precedents and socioeconomic changes in the Metro Atlanta area – where rent is rising three times faster than the national median, with over half the city’s census tracts currently undergoing gentrification.